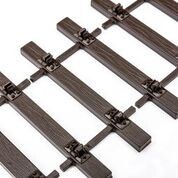 For track panels 60ft using four panels the two outer panels starting from the twelve inch sleeper facing away from each other on the sleeper spacing bars there are marks, the shortest distance to the sleeper remove and close up the gap this appears on two sleepers only remove the last sleeper. The middle two just remove the twelve inch wide sleeper, 60FT track panel will contain twenty four sleeper. Using the same sleeper panels you can also do 45FT panels with 18 sleepers with one less middle panel. Image to come.

Save this product for later
Display prices in: GBP

There is only one of me so please leave reasonable time between calls!